Here are some notes of interest from the November 20th meeting of Smaller Footprint, a group whose purpose is to share information, ideas, and planning for shrinking individual and household carbon footprints.

Here are a fewbooks that were mentioned last night:

Mike Berners-Lee, How Bad Are Bananas – an expert carbon footprint calculator gives footprints of everything from paper towels to steak to car accidents to space shuttle launches.

Barbara Kingsolver, Flight Behavior – The famed novelist’s story of a woman who finds a miracle that turns out to be the leading edge of climate change disaster. Much about the immediate experience of climate change creeping on us, leaving out discussion of what we can do about it.

Doug McKenzie-Mohr, Fostering Sustainable Behavior: An Introduction to Community-Based Social Marketing. The two types of social norms I mentioned that tend to cue people’s behavior, the names of which I can never remember off the top of my head, are injunctive norms (what people understand they’re supposed to do) and descriptive norms (what people perceive to be what others mostly do).

Dennis’s “Blue Ice Box” concept is a clever approach to reducing electricity use in refrigerators over the winter: purchase two sets of ice packs (he was thinking the blue ones, say, 12 ice packs total). Put half of them outside in freezing weather, then bring them in to the refrigerator as soon as they’re frozen solid. They’ll help cool your food as their temperature equalizes. When they’re entirely unfrozen, swap in the second set (which you’ll have had outside freezing in the mean time) and put the first set back out to freeze again.

Gotchas: leaving either the outside door or the refrigerator door open too long will cancel out some of the benefit of using this approach. Ideally, bring the ice backs in and out when you’re already going in and out of the house for other reasons.

Refrigerators use a thermostat, so adding the additional chill of ice packs will keep the fridge colder longer without requiring the compressor to start: voila, free cold and electricity savings! (Because cold is a renewal resource in Vermont.) 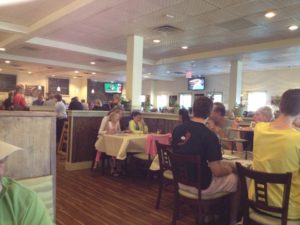